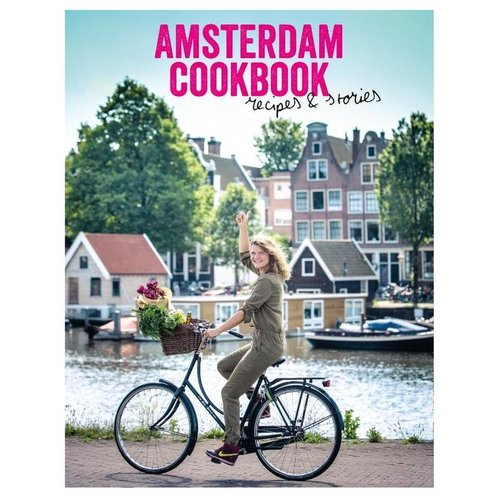 Discover the best markets, typical Amsterdam restaurants, the coolest hangouts and 'secret' addresses where only the very best of Amsterdam products are prepared. Lees meer

Discover the taste of Amsterdam! In this cookbook, culinary journalist Laura de Grave introduces you to her favourite Amsterdam restaurants and teams up with the city's chefs to prepare typical Amsterdam dishes that have become indelible features of the local cuisine. She invites us into the kitchen where she reveals not only the recipes themselves but also the stories behind each dish. She also meets the master craftsmen who are responsible for preserving the often centuries-old traditions and methods of cooking.

Hop up on the back of Laura's bike and join her as she criss-crosses culinary Amsterdam in search of the best markets, typical Amsterdam restaurants, the coolest hangouts and 'secret' addresses where only the very best of Amsterdam products are prepared.

About the makers
Laura de Grave (1987) is a culinary journalist and she lives in Amsterdam. She studied Dutch Language & Culture and Journalism and New Media. As a freelance journalist, she writes for Jamie magazine, Bouillon! magazine and Munchies (VICE) and has also contributed to a number of culinary books.

Hans de Kort (1963) is a freelance photographer who specialises in fashion, travel and portrait projects for a wide range of magazines and advertising agencies.